The best futuristic architecture in Singapore 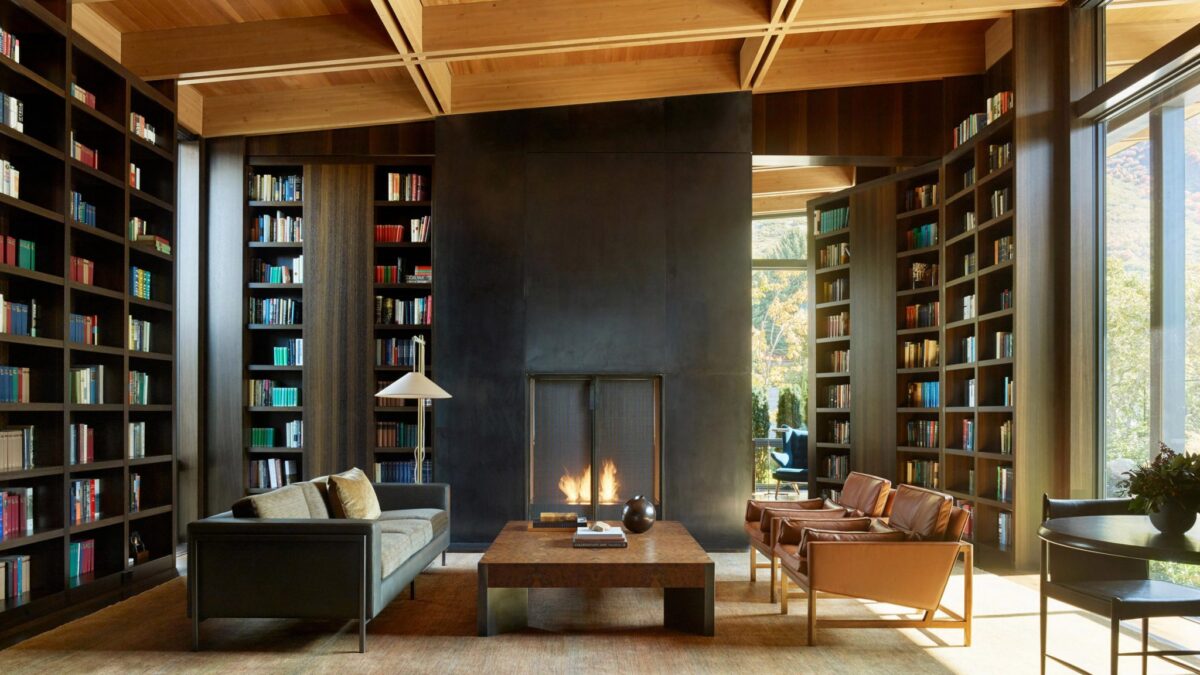 For our latest lookbook, we’ve rounded up ten living rooms that have solved the storage dilemma with bespoke shelving that define the room.

This is the latest roundup in our Dezeen Lookbook series providing visual inspiration for the home. Previous articles in the series showcased designer bathrooms, colourful kitchens and living rooms with calm interiors.

Whether they’re used as room dividers, to show off the owners’ book collection or as a hiding place for shy pets, built-in or custom-made shelves create a design statement.

Read on for our round up of the ten best from Dezeen’s archives (plus a bonus eleventh one, above, which features the spectacular floor-to-ceiling bookcases at Olson Kundig’s Wasatch House in Salt Lake City):

The living room of Mermaid Beach Residence in Queensland‘s Gold Coast region is a study in clever material use, with its concrete surfaces and timber flooring.

The monolithic built-in wooden shelving that fills one wall creates a decorative grid-effect on top of the concrete. It rests on a stone slab above wooden storage units at floor level.

Architecture studio Ruetemple looked to “drawing and architecture” when designing this artist’s studio in Moscow, which is dominated by a large plywood partition that incorporates both furniture and shelving.

As well as separating the lounge area from a workspace, the partition works as both storage space and furniture. It has a built-in sofa, shelving, and a set of steps that lead up to a suspended sleeping platform.

Spear Building Loft, US, by Ravi Raj and Evan Watts

This former factory in New York was renovated to create a bright, open living space. In the living room, simple built-in shelves were painted in a creamy pastel-yellow hue that harmonises with the white storage units and the fireplace.

Rather than building the shelves into a separate wall panel, they have been attached to the white wall on one side, which creates an airy feel and helps open up the room.

Its minimalist interior and simple colour palette, which blends beige, brown and grey hues, means the books in the shelves stand out as a splash of colour. The shelves also hold speakers and picture frames, helping to keep the rest of the room free from clutter.

In the living room of this hillside home in Sausalito, California, Feldman Architecture added plenty of storage space for the owners’ book collection, while the white panelling in the middle hides the TV from sight.

The walls and kitchen space next to the storage wall have been painted a matching glossy white, complemented by more natural hues such as a beige rug and brown Ligne Roset Togo seating.

In small apartments, built-in shelving can be the perfect space-saving solution. For MWAI‘s design of a 37-square-metre home in London‘s Mayfair area, it covered one wall of the open-plan kitchen and living area in a pale-wood storage unit that also includes a desk.

Colours were kept neutral to reinforce the studio’s idea to look at the design as that of a hotel room where “all functions are carefully and discreetly planned to provide a functional response.”

Architect John Wardle renovated his own Kew Residence home to make its wood-lined first-floor study the focal point of the house. Built-in shelves hold books and bric-a-brac on one side of the room and the architect’s art collection on another.

Neutral wood colours were used for the shelves and the built-in reading nook in the room, where the architect said he spends “just about all his daylight hours.”

House for Booklovers and Cats, USA, by BFDO Architects

The built-in storage in this colourful home lives up to the project name – it doesn’t just have space for books and art, but also for the owners’ two cats to hide away from visitors.

The custom-made shelf has dozens of cubby holes while projecting shelves form a staircase for the cats to ascend to the ledge at the top, where they can sit and observe the goings-on below.

The Hide Out, US, by Dan Brunn Architecture

Dan Brunn Architecture renovated The Hide Out, which was originally designed by Frank Gehry in the 1970s, to pay homage to its initial simple material palette.

In this living room and bedroom overlooking a meditation garden, the lush walnut seating nook is complemented by a built-in white bookshelf that also hides a fold-out bed.

The blue steel staircase in the middle of the living space in this home designed for fashion designer Roksanda Ilincic was designed to look “like a sculpture in a gallery.”

As well as a staircase, the piece functions as a shelving system with multiple shelves in different sizes. Its back wall is broken up rather than solid, which lets light pass through and stops the colourful piece from feeling too solid.